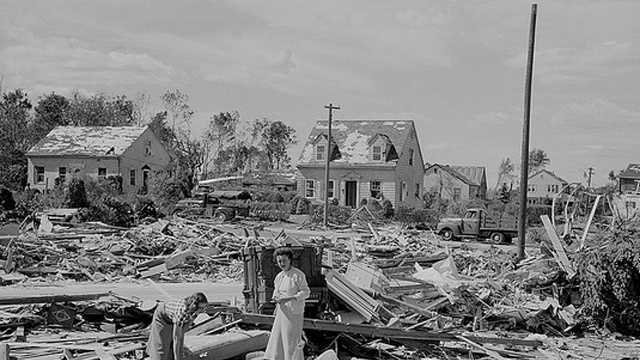 The thought of it, the sight of it,
the everliving fright of it
does not die from year to year
but returns, written in memory
with a dark pen that marks black
the mind’s funnel that tunnels
back to the day and night in early
June of 1953. What it meant for you
and me was fear, caught from our
mother like a dark disease, spreading
quickly through limb and vein
as we sat on the couch until very late
awaiting a second tornado authorities
warned of. Over the radio, news
of death and destruction. The numbers
grew with the passing hours––names
of the dead, names of the missing read
again and again. Does anyone listening
know the whereabouts of So-and-So?
So many So-and-So’s unknown before
that night formed a terrible litany not
forgotten for months afterwards
in all our communal prayers.